It's a pleasure for me to join your club about Fiat 124 cars.
In the very beginning of this year, I've bought a 1975 Familiare. As I see, it's first owner could be in Germany, and I don't know how it made it to Hungary. As I don't know how many owners it had before me.

As you can see, it's in a really bad condition, but nothing is impossible. I hope that in the near or far future I could restorate it - with original Fiat parts. Of course, here in Hungary we are very close to the Russian and Ukrainian market, but I don't want to use VAZ (Zhiguli & Lada) parts.
Of course, beside this newcomer I have two Zhigulis, as well, both of them 2101 type, one is from 1975, the other from 1977.

I've already started to collect written treasures (car body part catalogue, brochure, 1967 European Car of the Year sticker), but soon I will start to collect accessories (lamps, chrome parts, interior parts etc.), parts and other things. In Hungary I could buy only from Germany, Great Britain and USA via E-bay, but I have registrated to E-bay.com as well, so I can search on E-bay.it, and I've found some interesting parts.
If it's possible, I'd like to ask for a little help in gaining some articles, and to let me order them with your help. I have to give one of your member's Italian address for the delivery, and ask him/her to forward me the package. Of course, not for free.

Other thing came into mind. In Hungary, from the 15th to 17th of April there will be an Old Timer Expo (exhibition) in Budapest. The main reason is that Zhiguli is 40 years old in Hungary. But as a part of the Zhiguli history, we'd like to introduce one Fiat 124 Berlina and one Seat 124 to the Hungarian audience. If you know someone, who could be reached with this request (invitation), please let me know! If one of you would like to come to Hungary with your beloved automobile, we could offer you some help with the costs (also finding accomodation...). It would be a great pleasure to meet you! 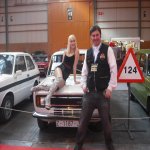 Thanks Juanito, it's really kind of you!

Welcome to the forum , congratulations for the two cars , beautiful ! , great job of restauration with the white car , very very nice

sorry for my bad english

Thanks for your kind words, these are the moments when I say, all the efforts worth it!

What is really fabolous about all the three cars, is to have these connections between Zhigulis and Fiat, and to have these cars as a real evidence of two decade-defining part of the automotive history!!!

I wish you all a very happy weekend!

Welcome in our big family and in our site one more time!

we are lucky to meet you and your Hungarian enthusiast people! firstly I' congratulate with you for your Fiat 124 and Ladas ...fleet!

you are right, nothing is impossible today and I'm sure your Fiat 124 Familiare - my next favourite version - will come back as new with some efforts. The same we can say for your white Zhigulì 21-01.
And is understandable your mind to restore it with Fiat genuine parts, because Fiat and Ladas are similar but not just the same thing.
After my own experience on it, I' feel to warn you about purchasing these parts on Ebay market: Ebay is a marvellous source but there are many and many dealers who ask too much for so many items!

Here in Italy, time to time there are very good Old Time Shows with their own spare parts markets. But I'll be happy to help you if you need something.
Unfortunately here, the Familiare version of our little gem is quite a rare bird, because it was generally snubbed.
Since it was out of fashion at that time (60-70s) it was considered like a working tool, suitable for traders and farmers. In Italy we must wait for Fiat Regata Weekend, in 1984, to see this body shape to gain acclaim.

We are all Fiat fans and I' m personally very glad for this joint venture Fiat 124-Zhigulì because it put together so many peoples and countries.
At Turin they are very proud to have motorized almost half world with this genuine pure horsebreed, so much that there are two examples of Zhigulì at the Turin's Fiat Museum.
I' just have visited this marvellous structure and in the very next future a comprehensive article (both in Italian than in English) will appear on this site; I' shot many photos in it and they will be included in this article.
I'm very sorry I' cannot fulfil your kind request, albeit now, to come to Budapest with a Fiat and a Seat 124

But never say never! I' agree with you, it will be a great pleasure to meet you.

O.K. Joseph, I' hope to hear you the next future, we wait for you here again!

Enjoy our best greetings from Italy and Fiat lovers!

Thanks for your welcoming words, it means really a lot!
And also the fact, that a car type could bring people together all over the world... (small world, only one country between, but there are enthusiasts in America, and in Australia as well...)

I've read your comment with full of emotions, and all infos you've written was like a slice of bread to those who are starving.

You mentioned being carefully with e-bay, and you're absolutely right, you always have to take care about what you're paying for. I always search for other resources, and just after finding out that e-bay offers the best solution, I place the bet.
As I heard, there will be an Old Timer Market in Imola in this fall (as in previous years...), and a few members of our club used to visit this event. So I'm planning to join them this year. But that plan needs other resources...

Other: it seems that we found a Fiat 124 Special and a Seat 124 in Hungary, both in well preserved condition, with a few modifications that could be restored.
But it's nearly a miracle... 'cause with this one, and with mine, there are only four 124s we know about... And only two Seats (in Hungary).

One question came to mind, that my Fiat could be older, than its papers say. As we guess, the year in the license is just the year when the car made it to Hungary. But it could be manufactured earlier, and firstly distributed in Germany. Other version is that we found out that a few Fiats we're manufactured in the NSU factory in Germany. As many as 19 thousand 124s we're manufactured, and it's a guess that this could be one of them... There's a German plate in the hood, as you probably saw it on one of the pictures.
Is there any possibility to search after it by the chassis number (124AF-0822565)? I wrote to FIAT in January, but there's no answer since then.

Meeting is one more target to reach, as I want to also visit Turin with the car (no matter if it's restorated or not that time...), or with the cars!!! They deserved it to make a big journey!

And about the present possibilities, I have to sell a flat, before I could invest into restoration, but just after that I will flush you all with questions!!!

My best wishes until my next check-in!
Joseph

Glad to hear you another time!

thank you very much for your very kind words, it' s very good so many people are brought together by this magic car!

And I' m happy to read you are warned about Ebay's ...wise guys! because they aren't honest and asks too much, they take advantage by the scarcity of the spares. You are well informed, towards the end of the year (from September circa) there are many spare-markets, like Imola, Padova and Torino: if you need something in I' can help you, on free way of course!

Nice to hear that a Fiat 124 Special and two Seat are extant in Hungary: some time ago I' viewed on the netwok a red Seat 124D in Hungary, perhaps may be that one of the two...
Very interesting the question about the birth date of your 124 Familiare; and more interesting is the fact the car could been produced under licence by NSU! this last supposition is very probable because the data label says: "Fiat Germany". However I' just have a good suggestion for you, supposing the car's glasses being original: look at the production number on the glasses (e.g. the windshield or the door's one), generally put high on the left: the last three digits will tell you the production year of your 124 (e.g. xxxxx0967).
Since I'm a Fiat Club member, I' also can try to write them in order to discover something more.
Should you desire, in the future we can meet, we'll find a way to do it early or late!

Don't mind to write us, we are happy to read you, and if you want to publish something about your cars and/or your Ladas' meeting we are standing for you!

Till the next time, take care of you!